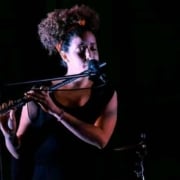 For more than a century, the transverse flute has been one of the main and most interesting instruments in Cuban music. Its prominence ranges from the so-called Charanga orchestras to the most contemporary Jazz, having virtuous exponents renowned worldwide.

In Cuba, the boom of the flute made this instrument increasingly present in orchestras due to the singularity of its sound and the “flavor” it added to dance music.

The transverse flute can be classified as an aerophone instrument whose register encompasses the mid-bass and high-pitched sounds. It’s got a versatile sonority since it can achieve different sounds for different purposes.

History and major performers of the transverse flute in Cuba

The flute reached its peak in Cuban popular music during the first decades of the 20th century with the emergence of the “Charanga orchestras”. These traditional music groups were made up of percussion instruments (tumbadoras, timpani, minor percussion), piano, violins, bass, flute. Later on, other instruments such as the trumpet, the trombone, and a larger percussion set were added. Because of its sonority, the flute became emblematic in the orchestras of the time, it is essential in musical genres such as Danzón, Cha-cha-chá, and Son, all of which are characteristic of Cuban music.

Orquesta Aragón (Aragón Orchestra) is undoubtedly Cuba’s most important charanga band while Richard Egües, nicknamed “the magic flute”, has been its most recognized flutist. His skills and peculiar sound became a reference for many professional and amateur musicians. His improvisations became so famous that they were imitated both inside and outside the country. This virtuous musician became the hallmark of this orchestra. One of his most renowned soloist performances appears in the recording of the famous song “Tres Bellas Cubanas” during the boom of the Buena Vista Social Club musical project.

Over the years, the flute has become essential in Cuban music. This fact justifies its presence in different musical genres and instrumental formats, as was the case of the well-known Los Van Van Orchestra —directed since its foundation by the late Juan Formell, an artist who claims to have totally changed the development of his group with the incorporation of this instrument.
The versatile and renowned Cuban musician José Luis Cortés was precisely the first flutist to use this instrument in Los Van Van. Cortés, known as “el Tosco”, is considered one of the most important flute players within Cuban musical culture.

After having been a member of orchestras such as Los Van Van and Irakere, Jose Luis Cortés founded his own, NG la Banda. His performance in this new musical group brought about new sonorities, more moderate and different. His technique to play the flute is nourished in a daring way by elements of concert music and Jazz, which in turn generates a change in his way of improvising. Due to his transgressive and diverse career, Cortés is considered the most influential flutist of the new generation of Cuban Jazz.

With the same artistic background, Orlando “Maraca” Valle, another representative flutist of Cuban music, came onto the scene. Unlike Jose Luis Cortés, he covered a much broader spectrum in the world of flute performance. During his studies, he absorbed specific and special techniques that were beyond the trend, focusing on sonority according to the evolution of the instrument.

Maraca has the merit of having managed to reproduce the sound of the wooden flute in the transverse flute. He has become one of the world’s strongest exponents of Latin Jazz, especially for his technique to play the instrument and his improvisation skills. He has been able to expand his music, reaching out to a very diverse audience. He was named as “the liberator of the flute” for moving away from the standard established for flutists in charanga music.
The transverse flute is and will be, one of the greatest attractions of Cuban dance music. It came from Europe to stay forever.

The History of Buena Vista Social Club Part 2: From Local Phenomenon to Glo...