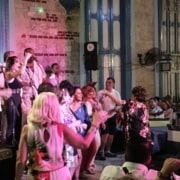 In a marginal neighborhood of Havana in the 1930s, an “alluring mestiza” danced in a black social club, eventually packing the most important and distinguished stages in the world. This is the true story of the “Buena Vista Social Club”. More than a name, more than a gathering of dance-loving folks, more than a nostalgic song, more than a Grammy-winning record and a multi-awarded documentary, this phenomenon enticed the whole world to dance and became the antonomastic insignia of Cuban Son. Buena Vista Social Club is all that and it is also the vindication of that “alluring mestiza” that Cuban popular music has always been.

Chapter 1: The place. The Social Club in the humble Buena Vista neighborhood.

From the depths of the Cuban East, the Son and the Trova were dragging musicians, poets, dancers, love stories, tragedies, parties, and passions in a kind of conga, until they reached Havana in the early twentieth century. In the capital, the Son seduced with such force that he came to merge with ballroom and solar dances, he entered the bowels of the culture to baptize everything he touched as “Cuban”, from danzón to salsa -which would later be consolidated as a genre in New York, at the end of the 60s-.

Thus the Son arrived at the Buena Vista Social Club, which, according to Rafael Lam (2016: 58), was a black society, of the many that existed in Havana before 1959. The Social Clubs were popular cultural societies in Havana, divided according to the different social strata, and where its members paid a monthly fee to participate in the activities that were organized there. Buena Vista, on the other hand, is a neighborhood located to the west of the city, and it was built to be inhabited by the servants who worked for the rich of Miramar, a neighborhood that was right next door, much more luxurious and residential.

The owner of the Buena Vista cultural society, Julio Dueñas, had moved the entity from a small and humble house to a slightly larger one in 1948. The new location had a patio and living room 15 meters long by 20 meters wide, where dances were developed and some of the most popular musicians of the time played. Although it was a humble neighborhood and the society was frequented by black proletarians, it was mandatory to dress elegantly in correspondence with the standards of the time.

Many of the events exceeded the cost of the average salary of the club’s worker members. The musician and composer Antonio Arcaño, one of the great monarchs of the dances, would later confess that he offered many free dances in that society. He did it not only for the satisfaction of that humble sector, but because those entities were dance music authorities, practically judges of the charangas, and if an orchestra succeeded in that environment, it could be considered a good orchestra.

The Buena Vista Social Club became the mecca of Cuban Son, where the most authentic musicians, composers and orchestras of the time passed, paradoxically the most humble. Antonio Arcaño, Arsenio Rodríguez and Regino Frontela Fraga –director of the Melodías del 40 orchestra- became the sovereigns of dance after passing the litmus test of the Buena Vista public. Legend has it that while absurd waltzes or fox-trots were performed in the highest status clubs, at the Buena Vista Social Club dancers packed the sidewalk when a concert by the danzoneras brass bands was announced, for example, La Ideal by Joseíto Valdés, La Típica by Pedrito Calvo, Cheo Belén Puig or La Típica by Aniceto Díaz.

In the new regime established after the triumph of the revolution in 1959, all societies and Social Clubs in Cuba were eliminated. Considered a “vice” that promulgated racism and the division of society, the concept of the Social Club was not compatible with the new socialist ideology. The Buena Vista Social Club was closed and the building became merely a home, with no more glories, and whose joys would not be evoked until decades later. 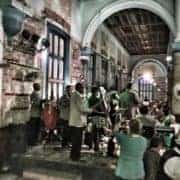